Oh Sh*t! Wrong Side of Heaven!

Heaven sucks. It most definitely, undeniably did not live up to the expectation of a paradise in the clouds, not with the talking spiders, evil priests of Light, and war, lots of war.

Those of Light simply wouldn’t leave the fledgling village—Dedu Tedu Novus—alone. Peace was not on the menu. The seven declarations of war made that point crystal clear.

Worse, in a series of unfortunate and escalating events, our stray King of Shadows finds himself where he really ought not to be.

Dhane, Dhane, Dhane . . . what ever will you do next? Uncover forgotten truths? Form alliances with monsters? Take a stroll in the most dangerous places a Shadow can be?

Stray Shadow is the second book in the Arachnomancer, GameLit series. It’s chock full of funny, fun, and silly things, including a butt-lickingly cute cat. Join Dhane on another wild adventure as he continues to fight for the Cobalins; meet whacky, new friends; and find himself in the most bizarre of situations.

Where to find it

As an Amazon Associate, I earn from qualifying purchases. If you buy my books using my links, I get a bit more from the sale. Thanks! 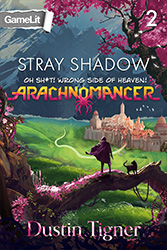