Exploit. Extract. Exit! These are the rules of a Dungeon Runner, though Entin has yet to write them and make his mark on the fledgling virtual world of Eternal Fantasy Online.

Three weeks ago, the Garentin colony ship—a century out from Earth—digitized their population in a desperate hope to survive a devastating terrorist attack. The colony of two thousand people must come to terms that this new world is their home forevermore.

Having lost everything, Entin is now a lowly market Runner, working for copper chyps to buy food and share whatever extra with the orphanage. It’s grueling, thankless work. That is, until a new, much more lucrative job, finds its way to him.

But nothing is ever easy. There are risks involved with going out into the Wilds, a place of monsters and dangerous mysteries. Is the loot worth it? What price will he have to pay to succeed where others have failed?

Dungeon Runner is a GameLit serial. It’s full of adventures, puzzles, and unusual paths to success. Watch Entin define the role of a Dungeon Runner and push the bounds of his reality in this new virtual fantasy world with endless possibilities. 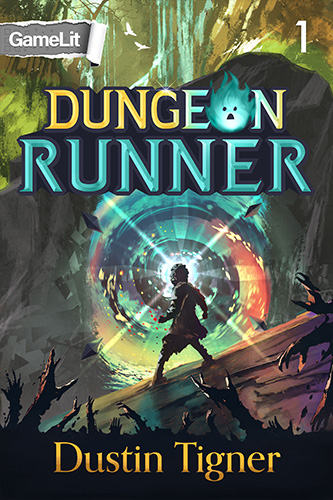 Where to find it