Dungeon Runner will return after the Arachnomancer series is complete.

A while back, a fellow author asked when he could start a second series. This author had a neat idea he wanted to explore, but his current series had yet to be completed. Other authors in the community offered up their thoughts: after three books, four books, whenever you want, etc.

I told the author to complete his series before he started another one.

I wish I hadn’t started two series at the same time (Arachnomancer and Dungeon Runner). They compete for time and mental space. They delay the other’s publishing schedule. And it can be hard to keep their worlds and characters separate.

I was sharing my personal experience, advising a new author not to repeat my mistakes. But I had already made a promise to my readers.

I was stuck. I created a series, which to me is an implicit promise that it’ll be completed. There was no going back.

A serial is meant to have a regular, scheduled update. Once a month would be acceptable. Once every two or three weeks would be exceptional.

Dungeon Runner started with a monthly release schedule. It quickly moved to every other month. Then I updated all mentions of the release schedule to be every three months before finally saying, “After each Arachnomancer release.”

I didn’t want to stop my progress in the middle of an Arachnomancer book to write a Dungeon Runner episode. This would have been quite disruptive to my creative process. But now, releases are far and wide between, and I’m forced to read through previous episodes and my world-building documents before writing anything new.

Simply put, I will focus on one series at a time.

This has been a very hard decision because I don’t like disappointing people.

Once Arachnomancer is complete, I will return to Dungeon Runner. To be able to give this story my full attention will—IMO—bring out the most creative and fun adventures for you to experience.

I know this will be disappointing to many of you. I was excited to write the third episode and was even nearly done with the cover. But I know this decision is the right one.

Dungeon Runner will return and will be better than ever when it does.

The first two episodes will remain free for now. Each episode tells a complete story, so if you haven’t read them, grab them now! 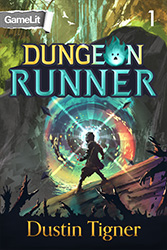